STM32F103C8T6 is a very powerful Microcontroller and with its 32-bit CPU, it can easily beat Arduino UNO in performance. As an added bonus, you can easily program this board using your Arduino IDE (although with some tweaks and additional programmer i.e. USB to U(S)ART converter).

An alternative to Arduino is the STM32F103C8T6 microcontroller-based development board, which is often called as the Blue Pill (Matrix reference). This microcontroller is based on ARM Cortex-M3 Architecture manufactured by STMicroelectronics.

Now that we have seen a little bit about the Blue Pill Board, let us now understand some important features of the heart of the board i.e. the STM32F103C8T6 Microcontroller. As mentioned earlier, this MCU contain an ARM 32-bit Cortex – M3 CPU core with a maximum frequency of 72 MHz.

Let us now see some specifications of this MCU implemented in the Blue pill board.

These are some of the highlights and if you want to know more details about the peripherals, then you have to refer to the data sheet and the reference manual (highly recommended).

A Brief Note on STM32F103C8T6 Development Board

The following image shows the front and back sides of a typical STM32 Blue Pill Board. As you can see, the layout of the board is very simple and some might even confuse it for an Arduino Nano. 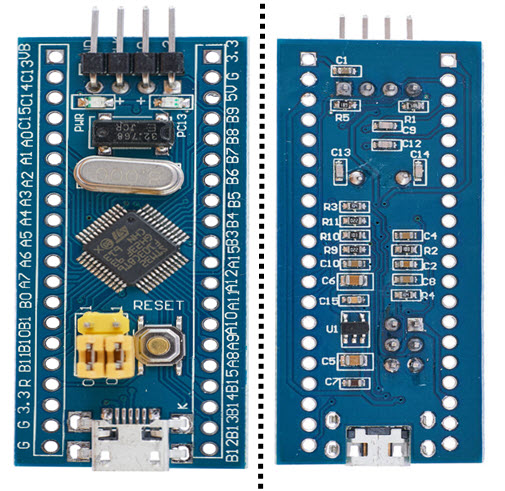 An important thing about these boards is that they are very cheap, cheaper than the cloned version of Arduino UNO. I got this board for approximately $2.5 (₹180) in my local electronics store. So, it is obviously a cloned version (probably a counterfeit STM32 MCU?) and there are many cloned versions of the board available in the market.

Coming to the Blue Pill board itself, you get the board and two male header strips for you to solder on to the board (shame that they don’t came pre-soldered). 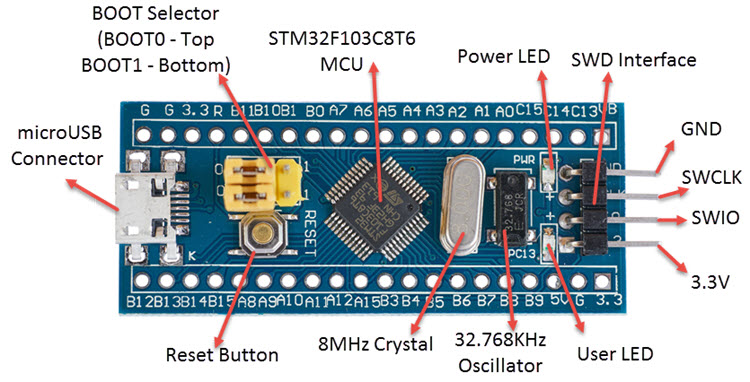 The other features of the board are as follows:

On either long edge of the board, there are pins for connecting various Analog and Digital IO and Power related stuff. The following image shows the pin configuration of the board along with different functions supported by each pin.

As you can from the above image, each pin of the STM32F103C8T6 MCU can have multiple functions (but only one has to be selected). Also, note that some IO pins are 5V tolerant, which means that you can connect 5V compatible IO on those pins without any worry.

Issues with STM32 Blue Pill Board

If you are planning to buy the cheaper version (which probably most of us will), then there are some known issues with the boards that you have to be aware of. I have taken these issues from various forums and faced some problems (USB related) myself.

As a bonus topic, let me tell you the naming convention used in STM32 MCUs with the example of STM32F103C8T6. Each letter in the name of the MCU signifies a special characteristic.

How to Use the BOOT Pins?

As mentioned earlier, the BOOT0 and BOOT1 pins of the MCU are used to select the memory from which it boots. The following image shows three different options of boot spaces based on these pins.

To upload the code to the Flash Memory of the MCU, you have to select System Memory as the main boot space. The reason for this is that the System Memory contains the embedded bootloader, which is programmed during the production itself by STMicroelectronics.

By booting into the System Memory i.e. the bootloader ROM, you can reprogram the Flash Memory with your application using USART1 Serial Interface. 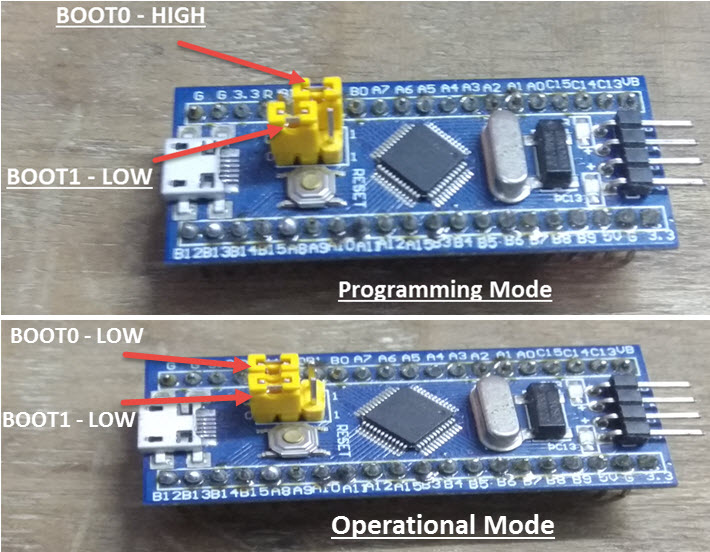 Hardware Requirements for the Project

Since this is our introduction part and all we will be doing is Blink an LED (which is already present on the board), we don’t need much hardware with respect to the project and the MCU.

For the purpose of easy representation, I am using an FTDI like USB to Serial Converter in Fritzing Software to show the connections.

The connections should be as follows: 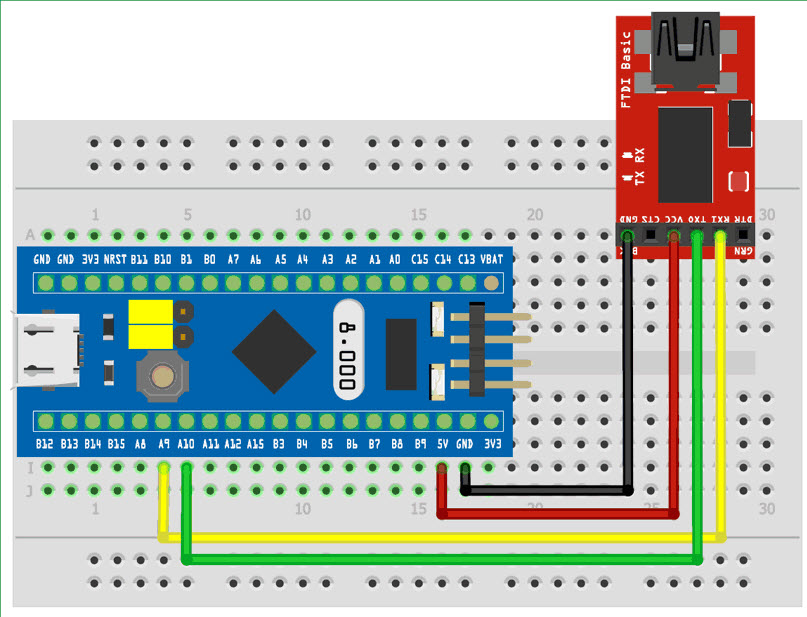